Continuing the discussion on Egypt, Tunisia, and the protests in North Africa/Middle East…

One important characteristic of these nations is that they have very young populations. Young adults, those under say age 35, dominate the population, much the same way the Baby Boomers dominated the U.S. in the turbulent 1960’s and 1970’s.   Having a lot of young people bodes well for a nation’s future prosperity – these are potential workers just starting their prime productive years. But it also poses definite challenges to the established hierarchies and systems. The opportunities must exist for the young adults and those opportunities need to be attractive. 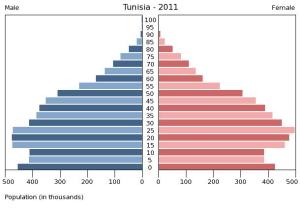 In both cases, we see young populations. In the case of Egypt, it’s interesting that we see a surge in population at age 30 and below. So what happened 30 years ago? One obvious answer is the Camp David Peace Accords in 1978 which finally brought assurances of peace to Egypt. For the decades before then, Egypt had frequently been involved in war, either WWII or with Israel. With Camp David Accords, Egypt also became a favored U.S. ally and started receiving significant U.S. aid. There’s nothing like peace and some increased income to raise birth rates.

In Tunisia’s case, the bulge starts 50 years ago and gradually keeps growing with a very large bulge in the age 15-30 age bracket. I’m not sure why the birth rate has apparently declined in the last decade with lower under age 10 population.  In both countries you a nations that are trying to develop and industrialize to join the fully-industrialized world. That alone will cause enormous disruption in society. But both countries also face a  much larger challenge in creating opportunities for these large numbers of young adults. Further, many of these young adults are college- and university-educated. Their expectations are higher than their parents. Finally, in today’s world, these young adults are connected to the rest of the world in ways unimaginable when the ruling dictators took office a few decades ago. There’s international TV, the Internet, and social networks such as Facebook and Twitter.
But the interesting thing is to compare to the U.S. where we do not have a young-dominated population anymore.  In the U.S., the population is much older.  Older populations are harder to rouse to revolution. But the U.S. hasn’t always been this old.  It’s largely the result of the aging Baby Boom.  If we look at the graphic at the bottom, we see a side-by-side comparison of population pyramids for the U.S. in 1970, 1990, and 2010.  Taken together they look like a snake swallowing an animal.  That bulge working it’s way up is/was the Baby Boom.  So if we look at the 1970 graph, we see a bulge in young adult population in the U.S. similar to Egypt and Tunisia today. So what was happening then in the U.S.? The U.S. was shaken by riots, youthful anti-war protests and major changes in culture. This was the era of anti-war protests that often shut down universities. At Kent State University, the National Guard was called out and the conflict resulted in 4 dead students.  At the time, many people worried that the U.S. was experiencing some type of revolution, although it didn’t come to pass.

4 thoughts on “Demography and Revolutions”