A casual reader/listener of many economics blogs, news stories, cable shows, and political speeches (in other words, the usual sources), would be forgiven for thinking that “inflation” is some awful comic-book super-villain that constantly threatens society.  It’s as if they think that any momentary lapse in vigilance that allows perhaps a declining unemployment rate will bring the villain back to life.  And worse, if we aren’t careful, they warn, the Inflation will morph dramatically into Hyperinflation, kind of like making the Incredible Hulk angry.  So even though the economy is struggling with millions of unemployed and underemployed people, we seem obsessed with the fight against Inflation.  Nevermind that inflation doesn’t harm us as much as unemployment, it’s what the powers-that-be fear now.  And recently as food prices rose during the winter and gas prices have recently risen back to the $4.00 per gallon range, we’re being told it’s coming!  Inflation.  Now before we hide the women, children and checkbook in fear, let’s stop and think about it.  Let’s start with Just what is inflation?

Inflation Is Not Just Price Increases

Many people assume that inflation is rising prices. It’s not. Rising prices are one of several signs that the economy might be experiencing inflation, but the fact that some prices go up is not inflation.  Inflation is a continuing, ongoing rise in all prices in the economy.  If you think of it this way, phrases that we read/hear like “food price inflation” or “gas price inflation” are just absurd, nonsense phrases that don’t mean anything.  It’s like saying “specific generality” or describing something as being “uniquely universal”.  If the price of only one group of specific commodities or goods are going up, then it’s not inflation. If the prices of all goods and commodities are going up, then it’s inflation.  So the fact that gas prices are going up or that food prices might have gone up means that buyers of those goods, which is most folks, are having to adjust their spending.  Those items are getting more expensive relative to other items.  In micro-economic terms, they are getting scarcer relative to the demand for them.  That’s an uncomfortable place to be if you need those products.  If you can’t cut back your consumption, if means you experience a real decline in your living standard. But it doesn’t mean the economy is experiencing inflation.  You cannot look at the price of one or two specific types of goods and conclude that inflation exists.  Period. You have to look at all prices across the economy. You have see that prices are rising for nearly everything that gets purchased.

This inflation-means-rising-prices-across-the-entire-economy aspect means we have to look at a very large number of goods prices, not just gas or food or gold.  But it also means more than goods prices going up.  All prices must be rising.  That means wages (price of labor), prices of financial assets, and prices of non-financial assets (things like real estate, collectibles, etc).  When we consider these other prices, we see that despite what we’re paying at the local Exxon station, inflation is conspicuously absent.  Wages are not increasing.  According to Data360, reporting government BLS data, the average hourly wage for good producing workers rose from $20.55 to $20.59 in first quarter 2011. That’s less than 0.2%.  On an annualized basis, it’s less than 0.8%.  No inflation in there.  Service-producing workers are worse off. The average wage is falling from $19.05 to $19.02.  Their wages actually declined!   Overall, no inflation in wages.

But what about non-financial asset prices?  Well the latest data on home prices also shows declining prices, not increases.  CalculatedRisk Blog reports on the March Case-Shiller house price index and reports a declines in recent months. No inflation in non-financial assets.

What about other goods, though? What about non-food, and non-gas price goods?  We can look at either the Consumer Price Index, the official government source, or we can look at MIT’s Billion Price Project index which tries to track a billion different prices and price changes in real-time.  It’s still a sub-set of “all goods”, but surely it’s a reasonable cross-section.  Paul Krugman reported on these indices on March 28, 2011 in his NYTimes blog.  This the graph he used: 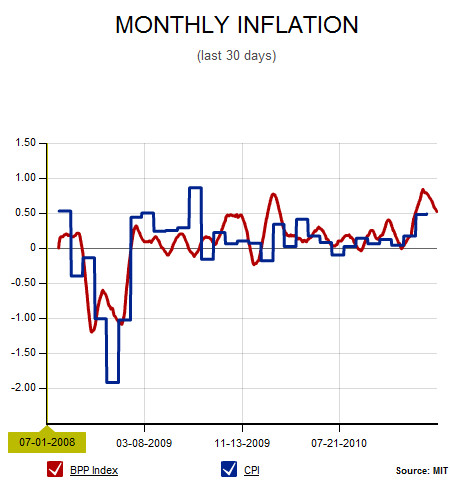 Notice the scale.  Prices of a wide selection of goods are rising at a less than 1% rate.  That’s not really inflation folks. So despite the prices in the groceries (which may be easing in coming months – they’re driven by weather issues) and the price at the pump, inflation is not a problem.

But there’s another aspect to our definition of inflation that’s very important.  That’s the use of the word continuous or continuing rises in prices.  If prices go up once or go up for a couple months and then stop rising, it’s not really inflation.  Inflation is when all the price rises begin to feed off of each other.  Most goods go up in price, so workers demand and get a rise in wages.  The wages go up and firm owners want their profits to go up too, so they raise the goods prices, driving even more demands for wage increases.  A spiral develops.  It’s called a wage-price spiral.  Everybody begins to expect inflation, rising prices and wages and so they start basing plans on assumptions of future rising prices, further increasing their present demands.  That’s how inflation works.  That’s what happened in the U.S. and many developed countries in the period of the late 1960’s through the early 1980’s.  It is not happening now.

A major reason why it can’t happen now is that workers don’t have any bargaining power to make demands for wage increases.  Union membership is very, very low by historical standards.  When unemployment is at 9% and has been for nearly 3 years, there’s no bargaining power for workers.

Yes, we are experiencing higher gas prices today. Gas prices may well continue to rise for months yet.  We have also experienced some higher prices for food, although the future trend is not clear.  Yes, gas prices are a component of many other product prices since transportation is critical to any physical product.  But what we are not experiencing is inflation. We are experiencing, in econ-talk, rising relative prices for gas, oil, and food.  To the extent that these goods are essential and we must continue to buy the same quantities of them, it means something else must give. Our standard of living will decline. But it’s not inflation.  We could call it workers-get-screwed-againism, but it’s not inflation.

Why does it matter what we call it?  It matters because the usual sources want to call it inflation so they have a political cover to do things they otherwise couldn’t do.  They want to cut government budgets and spending.  Some of them (bankers and big investors) would actually benefit economically from mild deflation.  They can’t get a hearing that way, so they call it “inflation” and they raise up the threat of a monster.  But it’s only a comic-book fake monster. It’s not real. Not now.

2 thoughts on “Just What Is Inflation? Is A Monster Just Around The Corner?”