Whenever some politician, typically a progressive, begins to talk about redistribution of income,  the more conservative politicians, backed by “serious political pundits” counterattack by claiming “class warfare”.  It’s apparently one of the givens in Washington that any form of redistribution of income, be it by progressive taxes, measures to protect unions, help to the unemployed, or limits on the power of bank executives to pay themselves bonuses from bailout monies, is off-limits.  The problem with this self-censorship of the political debate is that it ignores reality. Class warfare was already launched 30 years ago in the early 1980’s.  The catch is that capital, that is the owners and managers of capital, declared the war and they’ve been winning. 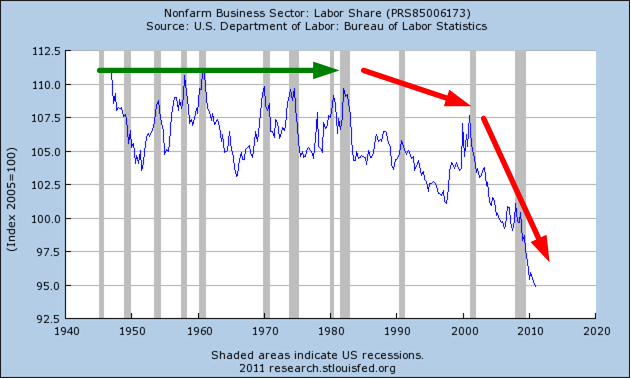 As the graph shows, the share of non-farm income that goes to labor was relatively constant for the 30-some year “golden age” after World War II and until around 1980. It fluctuated significantly with the business cycle, but maintained a long-run relatively constant share. This was consistent with the institutional, cultural, and political economy arrangements of the period. There was essentially a social contract that said labor cooperated with capital to achieve productivity improvements with the understanding that gains would be shared: both workers and owners of capital would benefit. This is basis of the rising real median incomes that I’ve noted elsewhere for the period.

But starting in the 1980’s there was  a shift in American politics.  Initially it was with conservatives and Republicans, but it soon included Democrats. Capital came to be favored. Unions were disfavored. Income taxes were lowered on high incomes while payroll taxes (social security and Medicare) were raised on workers.  The result was a trend where workers found it difficult to keep pace.  In fact, their real incomes didn’t.  If workers were in the lower quintiles, their real incomes actually declined.  Starting in 2000 the trend accelerated.  Workers get less and less of the value of what’s produced.  Corporate profits and financiers get more and more.

Instead of false debates about debt ceilings based on provably false doctrines, I think this is the type of thing we should be debating in politics.  Is this good? I don’t think so. It feeds income inequality.  It’s part of what’s destroying the “American Dream” for hundreds of millions of Americans.