Rebecca Wilder at AngryBearBlog.com explains why the current deficit hysteria that has gripped Washington is misplaced (and offers some great graphs of historical spending patterns).  A little terminology for some readers.  “cyclically endogenous” means the cause of the spending/revenue is not from some budget decision of this year’s Congress or President, but rather that the spending or revenue amount is the result of whatever the GDP and the economy did.  If GDP goes down and that causes some spending to go up, for example unemployment compensation, then that’s cyclically endogenous. (The bold emphasis is mine. You can click on graphs to enlarge them)

Readers here will know more about the US federal government income statement than I. However, given the near ubiquitous deficit hysteria, I wanted to illustrate the truth about the budget deficit. …

First things first, the fiscal deficit – receipts minus net outlays as a % of GDP – is big [by historical comparison]. In June 2011, the 12-month rolling sum of net receipts (the budget deficit) was roughly 8.5% of a rolling average of GDP. This is down from its 10.6% peak in February 2010, but the level of deficit spending clearly makes some nervous.

Why should they be nervous about the ‘level’ of the deficit? I don’t know, since recent ‘excess’ deficits are cyclically endogenous. The chart below illustrates the spending and tax receipt components of the US Treasury’s net borrowing (see Table 9 of the Monthly Treasury Statement). Weak tax receipts and big spending are driving the federal deficits (spending, as we will see below, has surged on items directly related to the business cycle). 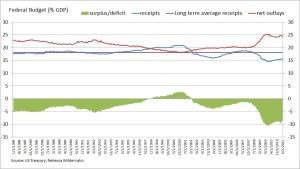 In June, the 12-month rolling sum of tax receipts – mostly corporate and individual income taxes and social insurance and retirement receipts – was 15.6%, which is up from its 14.5% cyclical low in January 2010. On the spending side, net outlays in June 2010 were a large 24.2% of GDP and down just slightly from the 25.3% peak in February 2010.

Deficit hysteria should be more appropriately placed as “lack of jobs and tax receipts hysteria”. At this point, the budget could just as easily worsen as it could improve, given the fragile state of the US economy (see Tim Duy’s recent post at Economist’s View).

Why the wrong hysteria?

Reason 1. Taxes. Some would love to increase taxes – but the fact of the matter is, that tax receipts remain well below their long-term average of 18% of GDP. Tax receipts will not improve without new jobs since individual income taxes account for near 50% of total receipts.

Reason 2. The spending has been on cyclical items.

The best time to ‘worry’ about government spending is NOT when the economy is barely moving.

The chart below illustrates the big ticket items of the monthly outlays – roughly 87% of total outlays. The broad spending components are listed in Table 9 of theMonthly Treasury Statement. The long-term average shares of total spending are indicated in the legend. 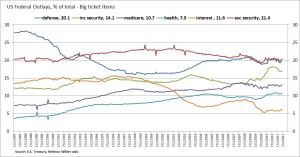 The items health, medicare, and income security (inc security) are all above their respective long-term averages. But spending on income security outlays is the only spending component to have broken its trend, i.e., surge. According to the GAO’s budget glossary (link here, .pdf), this item includes the following cyclical spending:

Support payments (including associated administrative expenses) to persons for whom no current service is rendered. Includes retirement, disability, unemployment, welfare, and similar programs, except for Social Security and income security for veterans, which are in other functions. Also includes the Food Stamp, Special Milk, and Child Nutrition programs (whether the benefits are in cash or in kind); both federal and trust fund unemployment compensation and workers’ compensation; public assistance cash payments; benefits to the elderly and to coal miners; and low- and moderate-income housing benefits.

It’s spending on unemployment and food stamps that’s driving spending at the margin.

The same deal exists with the ‘smaller ticket items’. Of these <5% of total spending items, energy, environment, and veterans have arguably broken trend. I would surmise that some of the ‘veterans’ spending is tied to the business cycle, given the timing of the surge. 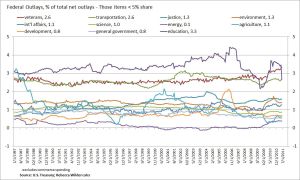 OK – so deficit hysteria is about, but it’s misplaced. One could argue for more, not less, spending to get the jobs growth, hence tax receipts, up.

One thought on “A Look at Government Spending Trends. Not What the Deficit-Fearers Claim. It’s Really A Jobs Deficit.”