This being the first Friday of the month, the latest U.S. employment report was released this morning.  Not good news.  In a nutshell:  no new net jobs created and the unemployment rate holds steady at 9.1%. It disappointed even the weak expectations of forecasters. The news continues to show an economy that has stalled without recovering and is in danger of relapsing to recession. CalculatedRiskBlog does it’s usual exemplary reporting of the latest monthly jobs and unemployment report:

Nonfarm payroll employment was unchanged (0) in August, and the unemployment rate held at 9.1 percent, the U.S. Bureau of Labor Statistics reported today. Employment in most major industries changed little over the month. Health care continued to add jobs, and a decline in information employment reflected a strike. Government employment continued to trend down, despite the return of workers from a partial government shutdown in Minnesota.
…
The change in total nonfarm payroll employment for June was revised from
+46,000 to +20,000, and the change for July was revised from +117,000 to +85,000.

The following graph shows the employment population ratio, the participation rate, and the unemployment rate.

Click on graph for larger image in graph gallery.

The unemployment rate was unchanged at 9.1% (red line).

When looking at the detailed numbers we find that the private sector created a net total of 17,000 new jobs.  Unfortunately this was entirely offset by government reducing employment by 17,000 jobs.  I suppose for Tea Party and Conservative types who blame government for most all economic ills and who fantasize about a society with no government, this is moving towards their ideal economy.  Somehow, I don’t see it that way.

Further details behind the numbers show that the number of private sector jobs was likely understated by 45,000 since during the survey week the 45,000 Verizon workers who were on strike were not counted as having jobs.  Those jobs will return in the report on September, assuming Verizon doesn’t lay off some of them.

Overall, the picture for recovering from the Great Recession has been turning bleaker.  We were never on a very robust path for recovery at all during the last 2 years.  However, now what modest slow momentum we had towards job recovery has stalled and job recovery has essentially flatlined.  At the current rate, we never recover the jobs lost in 2008-09 until at least a decade has passed, if that.  This is definitely starting to look like depression territory, not “recession”.  The following graph, also from Calculated Risk, 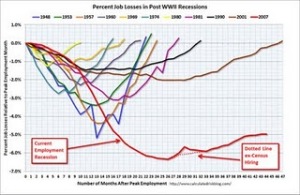 The second graph shows the job losses from the start of the employment recession, in percentage terms. The dotted line is ex-Census hiring.

The red line is moving sideways – and I’ll need to expand the graph soon.

The current employment recession is by far the worst recession since WWII in percentage terms, and 2nd worst in terms of the unemployment

The details in the report also show more depressing (sorry for the pun) news: