Two of the more important (U.S.) economic measures were reported in last week and half.  Yesterday the October jobs report came in.  The week before we got the flash report on 3rd quarter GDP.  Both measures were better than feared, not quite as good as consensus expectations of many forecasters, and overall still a disappointment.  First let’s look at the numbers and then I’ll comment. CalculatedRisk, as usual, reports the facts on the jobs report:

Nonfarm payroll employment continued to trend up in October (+80,000), and the unemployment rate was little changed at 9.0 percent, the U.S. Bureau of Labor Statistics reported today.
…

The following graph shows the employment

population ratio, the participation rate, and the unemployment rate.

The Labor Force Participation Rate was unchanged 64.2% in October (blue line). This is the percentage of the working age population in the labor force. The participation rate is well below the 66% to 67% rate that was normal over the last 20 years, although some of the decline is due to the aging population.

The Employment-Population ratio increased to 58.4% in October (black line).

Note: the household survey showed another strong gain in jobs, and that is why the unemployment rate could decline with few payroll jobs added – and the employment population ratio increase. 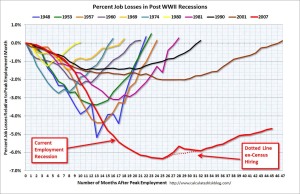 The second graph shows the job losses from the start of the employment recession, in percentage terms. The dotted line is ex-Census hiring.

Now we reach back to October 27 and CalculatedRisk again:

Real gross domestic product — the output of goods and services produced by labor and property located in the United States — increased at an annual rate of 2.5 percent in the third quarter of 2011 (that is, from the second quarter to the third quarter) according to the “advance” estimate released by the Bureau of Economic Analysis.

and a smaller decrease in state and local government spending that were partly offset by a larger decrease in private inventory investment.

growth (at an annual rate) for the last 30 years. The dashed line is the current growth rate. Growth in Q2 at 2.5% annualized was below trend growth (around 3%) – and very weak for a recovery, especially with all the slack in the system. 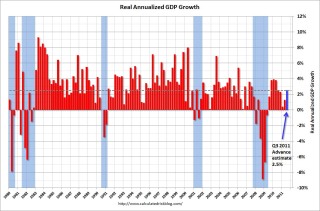 So what’s happening.  Nothing much, really.  That’s the problem.  The economy is effectively going sideways.  Yes, we continue to grow, but the rate of growth is so slow that we aren’t really seeing any improvement in conditions.  For all of 2011 we have grown at a rate below the long-term historic trend of 3.0%.  We are struggling to keep up with population growth and not really doing anything to “put people back to work”.  hat’s not a recovery.  That’s society throwing 5% of our workforce off the bus 3 years ago and saying “so long” forever.  It should be unacceptable, especially when it’s possible to do much better.