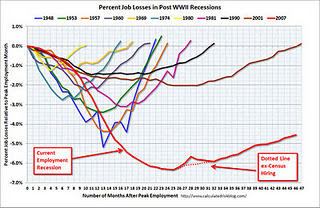 Thanks partly to the #OccupyWallStreet movement, these 14 million unemployed aren’t so invisible as they seemed last summer when the policy debates were all about debt and deficits.  Since denial of a problem has failed, folks who argue against any attempts by the government to stimulate the economy need a different pitch.

That revised pitch is that the unemployment problem is “structural”, not “cyclical”.  Now before I move on to show the problem is not structural, let me explain the difference. I’ve looked at structural vs. cyclical before here and here, but I’ll summarize.  In economist-talk, “unemployed” means you are part of the labor force but you don’t have a job.  To be part of the labor force, you must be actively looking (“willing and able”) to work.  Those numbers come from government surveys. Economists unofficially classify those unemployed workers according to why they don’t have a  job.  There’s four possibilities:

Which we have matters for policy reasons. If unemployment is structural, then we can effectively blame the unemployed for their fate.  They didn’t get the right skills. They chose to live in the wrong place. From a policy standpoint, the government might adopt policies that support re-training but that’s about it.   If, however, unemployment is cyclical, then government has plenty of room to reduce unemployment through stimulus programs, either effective tax cuts and/or increased government direct spending.

Brad Delong points us to David Wessel of The Wall Street Journal who tells us how and why today’s high unemployment is not structural. In other words, we could bring down the unemployment very dramatically and very quickly if we chose to.  Politicians in Washington simply choose not to do so. (bold emphases are mine)

Untangling Long-Term Unemployment: Herman Cain, the Republican presidential candidate, avoids carefully calibrated talking points. “If you don’t have a job and you’re not rich, blame yourself,” he said in a Wall Street Journal interview.

Beneath Mr. Cain’s blunt words lurks an economic hypothesis: that there’s nothing much government policy can do to bring unemployment down from today’s 9.1% rate…. [I]f the unemployed aren’t willing or able to fill jobs that muscular stimulus might produce then there’s little wisdom in borrowing more money or chancing inflation. We just have to suck it up.

But according to Fed governor Daniel Tarullo, a veteran of the Clinton White House and Obama presidential campaign who has spent the past few months consulting with Fed and other labor economists for a speech on the job market he is to deliver Thursday at Columbia University, there is little evidence that the bulk of today’s unemployed would still be unemployed if the economy were growing faster or that the bulk of today’s unemployment is, in the jargon of economists, “structural.”…

The Labor Department counts 14 million unemployed and 3.1 million job openings, or 4.6 jobless workers per job opening. Before the recession, the ratio was 1.5. If every opening were filled instantly, there would still be many unemployed.

Wages aren’t rising. “We don’t see rapid wage growth almost anywhere, which is what you would expect if firms were bidding up the wages of qualified workers and were unable to find qualified workers among the unemployed,” said Harvard University’s Lawrence Katz.

Unemployment is up across ages, occupations, industries and years of schooling. “We had a fast-advancing economic decline with layoffs and hiring freezes in a broad range of sectors of the economy. That is not consistent with an increase in structural unemployment being the big explanation,” Mr. Tarullo said…