I’ve always found putting things in historical perspective and looking at the long-term trend of things usually illuminates a lot of policy discussions. It’s easier to see “what’s really happening” if you look at the long-term trend.  Taxes, tax rates, and the government budget are often hot topics of policy debate.  So is the future of the intergenerational social insurance programs such as Social Security and Medicare (also here).

As Paul Krugman has often mentioned, the best way to think of the U.S. federal government budget is to think of the government as “an insurance company with an army”.  But who pays for this insurance company (Social Security, Medicare, Medicaid) and it’s accompanying army?  The distinct trend of the last few decades is that individuals are being asked to shoulder more and more of the burden and that corporations are carrying a less-and-less share. In fact, as this graph shows, the corporations are nearing becoming insignificant in their contribution to the general welfare and maintenance of our government. 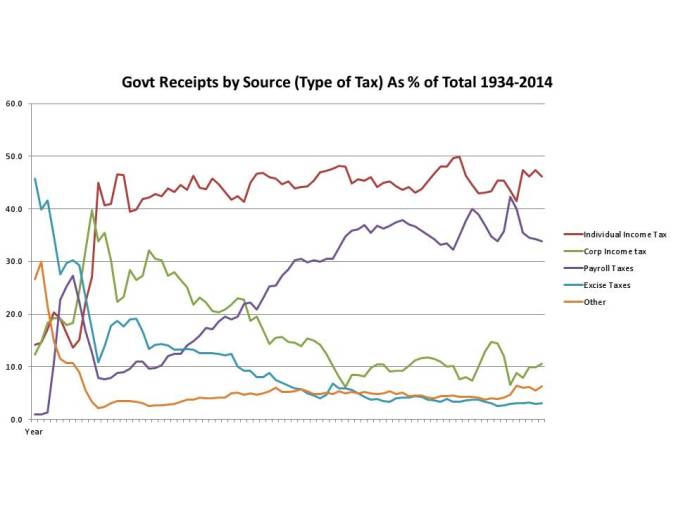 Source: US Office of Mgt and Budget https://www.whitehouse.gov/sites/default/files/omb/budget/fy2016/assets/hist02z3.xls

The data for this graph is from Office of Management and Budget in this file.

2 thoughts on “So Who Pays For the Government and How?”