Note: This post is for both my talk at the Lansing Community College Centre for Engagement and for this week’s class discussions in Comparative Systems. 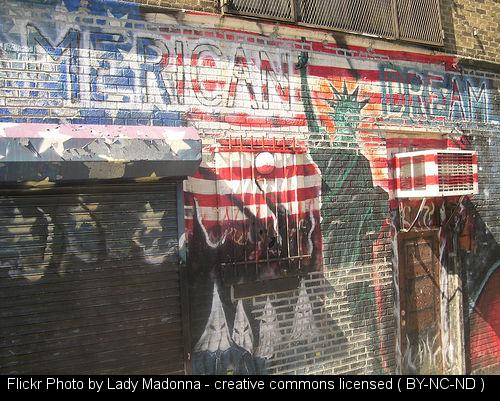 For those of us who have grown up in the late 20th century or the early 21st century, the American Dream has been a familiar relative – an Uncle Sam that was always there. The American Dream was the myth that united us. More than any other nation perhaps, the U.S. has always been defined more by concepts and ideals – these myths or stories – than by the traditions of blood, tribal roots, or land that defined so many other nations throughout history.

It can be argued that the American Dream, or at least our modern conception of it, was born in 1931 in pages written by James Truslow Adams.  Wikipedia recounts for us:

The American Dream is a national ethos of the United States, the set of ideals (democracy, rights, liberty, opportunity, and equality) in which freedom includes the opportunity for prosperity and success, and an upward social mobility for the family and children, achieved through hard work in a society with few barriers. In the definition of the American Dream by James Truslow Adams in 1931, “life should be better and richer and fuller for everyone, with opportunity for each according to ability or achievement” regardless of social class or circumstances of birth.[1]

The American Dream is rooted in the Declaration of Independence, which proclaims that “all men are created equal” with the right to “life, liberty and the pursuit of happiness.”[2]

There are lot of ways to operationalize the concept of the American Dream, but for these purposes I’m going to basically identify three features, all of which are primarily economic.

The “American Dream” meant that anybody in America, regardless of birth or station or inheritance, could through ordinary hard work do the following:

If the American Dream were a person born in 1931 when Adams coined the phrase, then by these criteria we can describe his (her) life as:

By the time the Millenials arrive on the scene as young adults, the concept of American Dream is more a nightmare or cruel joke than a dream.

From here I’m going to try to explain what has happened using mostly data and graphs.  First we’re going to look at the evidence that indeed, upward mobility and the ability to “earn more than dad” are dead.  For the next section here, I’m going to use graphs from

Next, we’ll take a look at the specifics of how that has affected so-called “millennials”:

If we have time, I’ll speculate on the causes and what can be done.

My slides that I’ll use in addition to the graphs in the above links are here.  If this embedded view won’t display in your browser or allow you to download, use this link: